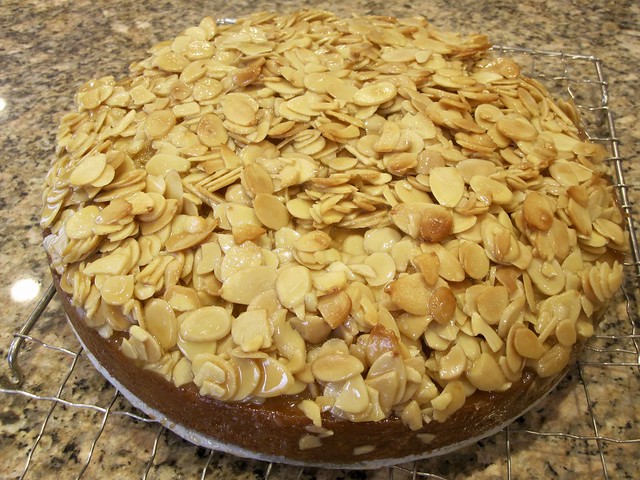 DAVID LEBOVITZ
8 to 10 servings
You can use blanched or unblanched sliced almonds. Either will work fine. I toasted mine, which were a mix of the two, in the oven while I was putting together the cake batter. They’ll take about 8 to 10 minutes 325ºF stirring them once or twice during baking so they toast evenly. The topping is quick to put together and should be done as the cake is baking. Ideally it should still be warm when you’re ready to spread it over the cake and if it cools down, you can gently rewarm it before you spread. (The heat of the just-baked cake will help it spread, too.)
For the cake
5 tablespoons milk, whole or lowfat
1 teaspoon white or cider vinegar, or lemon juice
5 tablespoons (2 ounces), unsalted butter, cubed
3/4 cup granulated sugar
1 teaspoon vanilla extract
3 large eggs, at room temperature
1 cup plus 1 tablespoon flour
1 teaspoon baking powder
1/8 teaspoon salt
For the caramelized almond topping
1 1/2 cups sliced almonds, lightly toasted
8 tablespoons (4 ounces), unsalted butter, cubed, at room temperature
2/3 cup, packed light brown sugar
1/4 cup whole milk
1/2 teaspoon vanilla extract
1/2 teaspoon salt
For the cake
1. Preheat the oven to 325ºF Butter a 9-inch springform pan and line the bottom with parchment paper.
2. Mix the milk with the vinegar or lemon juice in a small bowl or measuring cup, and let stand for 10 minutes at room temperature.
3. In the bowl of a stand mixer fitted with the whip attachment, beat the eggs, granulated sugar, and vanilla until it holds its shape when you lift the whip and the batter falls back on itself, about 5 minutes. Melt the butter in a medium saucepan. Remove from heat and set aside, but don’t let it get too cool. You want it to be as close to tepid as possible when you fold it into the batter
4. Whisk the flour, baking powder, and salt together in a small bowl.
5. Using a flexible spatula, carefully fold one-third of the dry ingredients into the whipped eggs, being careful to deflate it as little as possible. Fold in half of the soured milk, then fold in another one-third of the dry ingredients.
6. Fold in the remaining milk, then the rest of the flour mixture.
7. Dribble in the tepid, but still liquid butter into the batter, carefully folding it in as you go, just until it’s incorporated. Be sure to reach the bottom of the bowl as you go, to avoid unincorporated lumps of flour. Don’t overfold – better to have a few lumps than to deflate the batter. Transfer the batter carefully into the prepared pan and bake until it feels set in the middle (a toothpick inserted into the center will come out clean, about 30 minutes. Remove the cake from the oven and increase the heat of the oven to 400 deg.
For the caramelized almond topping
8. While the cake is baking, make the caramel-almond topping by melting the butter in the saucepan along with the brown sugar, milk, vanilla, and salt. Bring the mixture to a boil and cook for 2 minutes, or sooner, until it starts to thicken. Remove from heat and stir in the toasted almonds.
9.. Scrape the mixture over the cake and gently coax it over the top of the cake, reaching to the sides of the cake pan. Avoid applying any pressure so you don’t break through the top of the cake underneath.
10. Put the almond-topped cake back in the oven and bake until the caramel between the almonds starts bubbling up thickly between the almonds, about 8 minutes. Remove from oven. After 5 minutes, run a knife around the outside of the cake to release it from the sides of the pan then let the cake cool completely before serving and slicing. 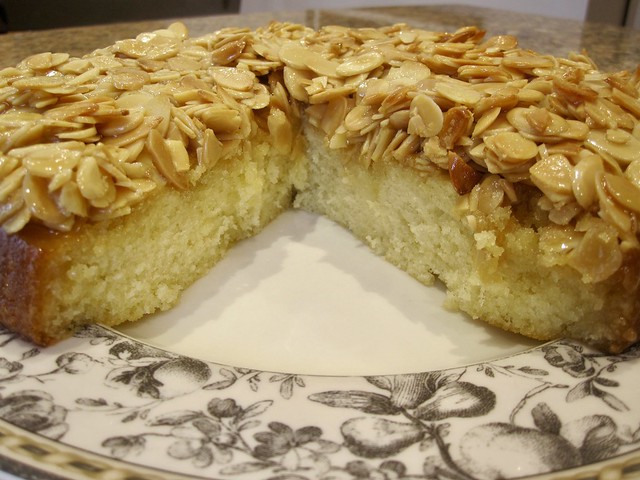