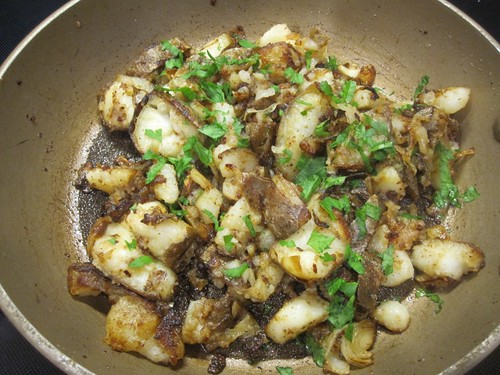 2. Prick the potatoes with a fork (so they don’t blow up), place them on a baking tray, and bake them on the middle rack until a fork goes in easily, about 1 hour. Remove the potatoes from the oven and let them rest on the countertop until they’re cool enough to work with.

3. When the potatoes are cool, roughly cut them into large chunks with a small knife.

4. Bring the oven back up to 425°. Pour the olive oil into a large fry pan. (Pick one that’s safe to use in the oven and on the stovetop .) Scatter the onions in the pan and layer the potato chunks on top. Bake uncovered on the middle rack for about 15 minutes, turning the contents every 5 minutes, until the onions begin to soften and caramelize.

5. Remove the pan from the oven (leaving the oven on) and cook over high heat on the stovetop for 2 minutes to caramelize the potatoes and onions, being sure to shake the pan or stir the contents every 30 seconds or so to avoid burning.

6. Return the pan to the oven and continue baking for another 5 to 10 minutes, pulling the pan out periodically to shake the potatoes around with a spoon. Bits of potato on the bottom of the pan will brown up so they look almost like hash browns. Scrape these little crispiness bombs off the bottom and mix them in with the rest of the potatoes. When the potatoes are finished baking, they will be golden and crispy, with lots of brown bits.

7. Remove the pan from the oven and return it to the stove over medium-high heat. Add the garlic, butter, red pepper flakes, and oregano. Stir, and season very liberally with salt and pepper. The potatoes should be crispy and crunchy on the outside, soft on the inside- think Italian hash browns. Cook for a few more minutes so the flavours meld. Remove the pan from the heat and add the chopped parsley. Serve immediately.