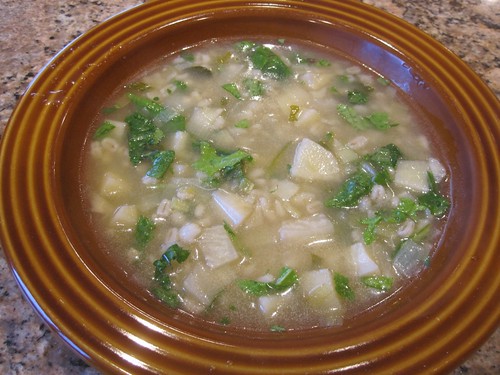 In a large pot, heat the oil. Add the onion, leeks and garlic and cook over moderate heat, stirring occasionally, until tender, about 5 minutes. Stir in the barley. Add the vegetable broth and water and bring to a boil. Add the celery root and parsnips and season with salt and pepper. Simmer over moderately low heat until the barley and root vegetables are tender, about 40 minutes.
Stir in the spinach and simmer for 5 minutes. Season the soup with salt and pepper serve and enjoy.

2 Responses to Vegetable Root Soup with Barley and Spinach