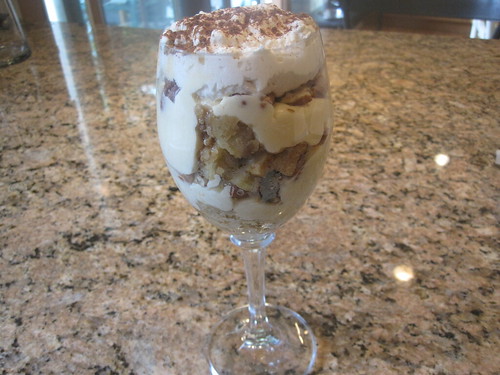 This dessert turns an apple crisp into an elegant trifle.From Anna Olson.
Not a typical trifle, this holiday dessert is made by layering chilled apple crisp with a Bourbon spiked pastry cream and toasted pecans.
Pastry cream:
• 1⁄2 cup half-and-half cream
• 1⁄2 cup milk
• 4 egg yolks
• 1⁄4 cup packed light brown sugar
• 2 1⁄2 tbsp cornstarch
• 2 tsp vanilla extract
• 2 tbsp unsalted butter
• 3 tbsp Bourbon
Whipped cream & assembly:
• 1 1⁄2 cups whipping cream
• 2 tbsp sugar
• 1 tsp vanilla extract
• 2 tbsp Bourbon, plus extra for sprinkling
• 1 recipe Apple Crisp (recipe follows) baked and chilled
• 1 1⁄2 cups lightly toasted pecan halves
• for garnish, ground cinnamon
Bring the cream and milk up to a simmer in a sauce pot. In a separate bowl, whisk the egg yolks, brown sugar, cornstarch and vanilla. Slowly pour in the hot cream while whisking and pour the entire mixture back into the pot. Whisk the custard over medium heat until it has thickened and just begins to bubble, about 3 minutes. Pour the cooked custard through a strainer and stir in the butter. Place a piece of plastic wrap directly over the surface of the pastry cream and chill completely. Once chilled, stir in the Bourbon.
Whip the cream until they hold a soft peak. Fold 1 cup of the whipped cream into the pastry cream. Stir in the sugar, vanilla and 2 tbsp of Bourbon into the remaining whipped cream.
To assemble, spoon out half of the chilled apple crisp into a 12 cup trifle bowl and sprinkle with Bourbon. Top the crisp with half of the pastry cream and sprinkle with half of the pecans. Top this with the remaining apple crisp, sprinkle with Bourbon and top with the remaining pastry cream and pecans. Spread the whipped cream overtop and dust lightly with cinnamon. Chill until ready to serve.

Classic Apple Crisp
One of the easier desserts to make, a crisp is also easy to personalize by using your favorite fruits, or to use what is in peak season or simply available to you.
Makes 1 8-cup baking dish. Serves 6 to 8.
• 6 cups peeled and diced apples
• 1⁄4 cup + 1⁄2 packed light brown sugar
• 1⁄2 tsp vanilla extract
• 11⁄4 regular rolled oats
• 1⁄3 all-purpose flour
• 1⁄2 ground cinnamon
• 1⁄2 unsalted butter, melted
Preheat the oven to 350°F.
Toss the apples fruit with ¼ cup of the brown sugar and the vanilla and spread it into an 8-cup baking dish.
Stir the oats, the remaining ½ cup of brown sugar, flour and the cinnamon. Pour in the melted butter and stir until evenly combined. Sprinkle this over the fruit and bake for 35 to 40 minutes, until the fruit is bubbling at the edges and the crisp is evenly browned